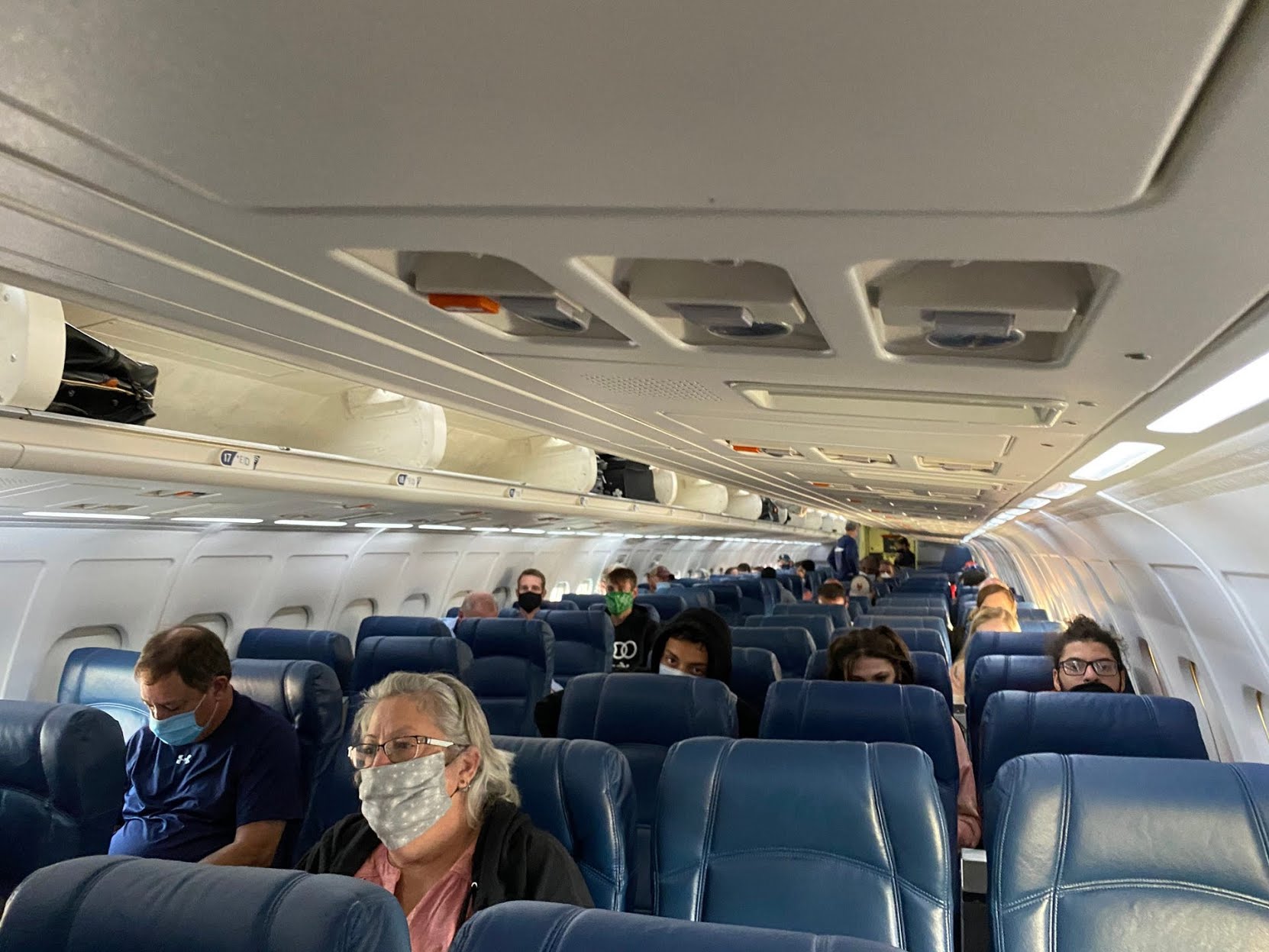 I flew on the 4 biggest US airlines during the pandemic to see which is handling it best, and found one blew the rest out of the water- Business Insider-

Over four weeks in June, I flew seven flights on the largest airlines in the US.

The experiences have been unlike anything I’ve seen before in a lifetime of flying, with each airline having its own way of handling the pandemic. No two airlines have been exactly alike on any of my journeys, and seemingly ever-changing policies are creating confusion for passengers.

Here’s what you can expect on each airline.

Starting July 1, American began filling its flights to capacity and not blocking any middle seats. If a passenger is on a crowded flight, there is an option for a free flight change if an alternative flight is available.

Middle seats can be selected in advance, and passengers flying in basic economy may be automatically assigned a middle seat, even if other aisle or window seats are available. Only check-in or gate agents typically have the power to change seat assignments if a passenger isn’t happy with a seat location.

American has not said which factors determine whether the option to change flights is offered. The airline has been operating a reduced flying schedule, so alternative flights have not always been available for passengers, but an airline representative told Business Insider that more flights being flown starting July 7 should give passengers more options.

Boarding
American operates a normal boarding process, and passengers still board in their assigned groups, which vary based on seat location, fare type, and status. First class still boards first, and basic economy boards last, regardless of seat location.

This results in economy passengers in the back of the plane walking through an entire aircraft of people before arriving at their seat.

Signage at the gate informs passengers that masks are required and that the airline has adopted new cleaning standards but does not go into detail.

American is limiting the in-flight service depending on the duration of the flight. Flights under 2,200 miles will no longer have a snack or drink service, with nonalcoholic canned or bottled beverages being served on request in economy.

Flights greater than 2,200 miles will see a beverage service but no snack service in economy. The airline will also not distribute wipes or hand-sanitizer kits to passengers upon boarding or as part of the in-flight service.

Flight attendants on American are typically asking passengers to remain seated until it is time for their row to deplane.

Delta is blocking middle seats and certain aisle seats on its flights until September 30. Passengers who still do not wish to travel on a crowded flight even with the capacity restriction will have the option to request a free rebooking to a later flight, a Delta representative told Business Insider.

Boarding
Delta is boarding its aircraft back to front with passengers being asked to remain seated until their row is called. Elite-status holders and first-class flyers can still board first.

The airline has also installed placards both on the floor and in jetways at hub and outstation airports reminding passengers to socially distance. Employees at Delta’s Atlanta hub were distributing hand sanitizer to passengers of all airlines after the security checkpoint. 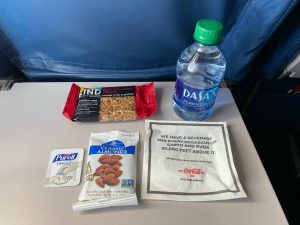 Deplaning
Flight attendants did not ask passengers to stay seated during the deplaning process.

United is not blocking middle seats but won’t assign them until there are no more aisle or window seats to assign. Passengers on flights with greater than 70% capacity will have the option of free flight changes, but as United’s flying schedule has been reduced because of the pandemic, options are limited.

Boarding
United is boarding its aircraft back to front with first-class passengers and elites still boarding first. Economy passengers are boarded from the last row forward in groups of five rows.
Gate agents are asking passengers to scan their own boarding passes when they board to reduce interactions between staff and passengers. Passengers are given sanitary wipes when they step on the plane that can be used to clean the seat.

Signage at the gate area informs United passengers of the sanitary measures the airline is taking including requiring face masks to be worn and the new fogging procedures. The displays, however, were inconsistent and were prominent only at United’s hubs and not outstations.

In-flight service
United has suspended the in-flight snack and beverage service for shorter flights in economy, including those less than two hours and 20 minutes. Passengers can, however, request beverages from the flight attendant.

On flights longer than two hours and 20 minutes, passengers in economy will receive a snack bag that includes a sanitary wipe, water bottle, stroopwafel snack, and package of pretzels. 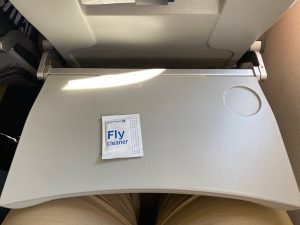 Deplaning
Flight attendants on United are typically asking passengers to remain seated until it is time for their row to deplane.

Southwest Airlines
Blocking middle seats or allowing free flight changes
Southwest is limiting capacity by about one-third so there are no more than two people in each row, with exceptions for families. The airline does not assign seats in advance.

Boarding
Southwest is boarding its aircraft in groups of 10 based on a boarding number given at check-in. The system is similar to the airline’s previous procedure, except only 10 passengers line up and board at a time instead of 30.

Some airports were not following the 10-passenger procedure, as I found on a recent Southwest flight, and passengers who boarded first chose to sit in the front of the plane. As Southwest allows for open seating, this meant passengers boarding last would have to walk past crowded rows of people.

There is some signage at the gate asking passengers to socially distance and informing them of the new boarding procedure but no visuals or anything pertaining to the airline’s new cleaning procedure.

In-flight service
Southwest is suspending the in-flight service on flights under 250 miles. Passengers on flights over that threshold will receive a cup of ice water and a snack bag served by flight attendants.

Deplaning
Flight attendants did not ask passengers to stay seated during the deplaning process.

The Winner
Delta Air Lines is the clear winner here, as nearly every aspect of a flight has been revised to become more passenger-friendly during this pandemic while not compromising too much on service. From placards and informational signage in the gate area to blocking middle seats and maintaining an in-flight service, albeit limited, Delta is leading the way in multiple aspects.

Southwest Airlines comes in a close second, with the low-cost airline earning its reputation for good customer service even more so during this crisis. The only downsides were the boarding process, the lack of informational signage at the gate area that I found on most other airlines, and a lack of consistency in staff following the new procedures.

United Airlines is the second-runner up mainly because I found its policies to be more empty gestures than actually helpful. The airline is offering free flight changes despite having few backup options and restricting the advance selection of middle seats rather than blocking them but are still allowing flights to fill up,

United did have some positives in that it revised its boarding procedure and offered sanitary wipes upon boarding, but I did find a lack of consistency in informational signage at different airports. Flights on United were boring, above all, as the in-flight service was also suspended.

American Airlines was the least passenger-friendly airline I found on my travels with a complete lack of social-distancing policies and abandonment of in-flight service on most of its domestic flights. It’s largely business as usual when flying on American, as if there is no pandemic occurring, with the airline happy to assign middle seats to basic-economy passengers when entire empty rows are available and keep the standard boarding procedure.

I will say, however, that all aircraft I flew on from all airlines were clean and I was never worried I was getting on a dirty aircraft.